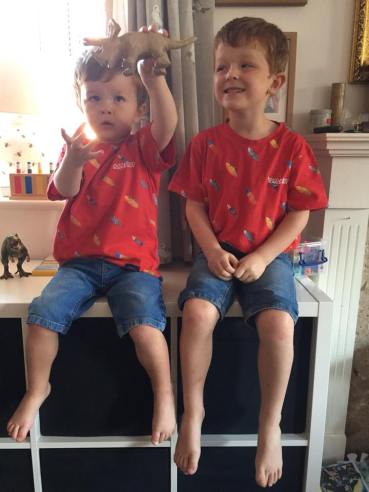 He struggled with shoe shops, so we avoided those.

New Clothes. a big no no. It even got to a point where if I took him to a shop and I tried on new clothes or shoes he would crumble. We were at breaking point.

Things which you and I would take for granted just became massive obstructions for him.

It all kicked off because Atticus had had an Allergy appointment in London a few months previously. We had stopped the anti histamines which meant he looked like a lizard and his skin flared up worse than I had ever known it to.

The Allergy consultant gave me some rescue emollient to put in the bath. All good I thought. Actually it wasn’t. it was the biggest own goal I have ever scored. As soon as I put it into the water he freaked out. As if he was being murdered. The water went milky.
He refused a bath from then on. In total about two and a half months and I was at my wits end. Paddling pools, showers at the swimming pool, strip washes. I tried all I could.

I needed help. I made an appointment to see Atticus’ paediatrician and it was agreed that he would be put onto the emergency waiting list for an ASD assessment through ASD pathways.

We got the call three days later. An appointment for a cancellation at the Beginning of August. Thank the Lord. Finally a chance to discuss and speak and hopefully make some sense of the life that was Atticus.

We attended the appointment. It was like sitting and waiting to do your exams, or a driving test. I was that nervous. This could potentially explain all his little quirks. Or it may confirm that my ability to parent was actually totally inadequate and it was me that was the problem.

Two hours later and it was all over. ASD. The sense of relief that it wasn’t me was profound. But I admit I cried all the way home for fear of the path that lay ahead. For the unknown journey and whether I could now meet his needs.

We were now on a new path.

What do you think?